WCS allows mixing streams of active broadcasts. The output stream of the mixer can be recorded, played or republished using any of technologies supported by WCS.
Mixing is controlled using settings and REST API.

The mixer allows custom placing of video streams in the output frame. The stream with a certain name (by default desktop) is seen as screensharing and hence is placed in the center of the frame: 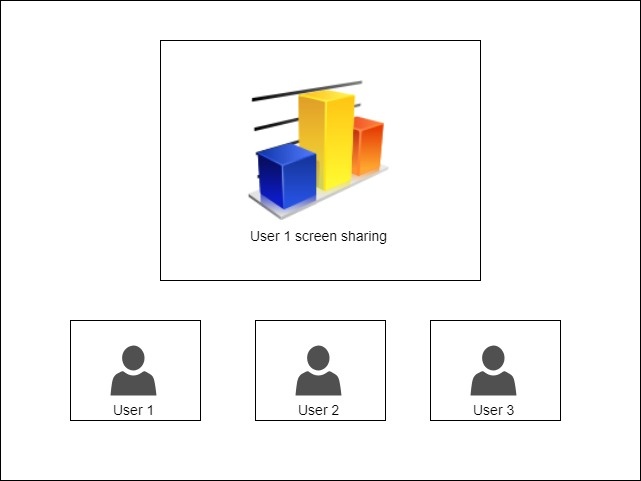 Automatically create a mixer when publishing the stream

If the name of the published RTMP stream has the '#' symbol, the server treats everything after that symbols as the name of the mixer that will be created when the stream is published. For instance, for the user1#room1 stream, the room1 mixer is created, and the stream is added to this mixer then. The stream name can also include the screen sharing keyword, for example, user1#room1#desktop 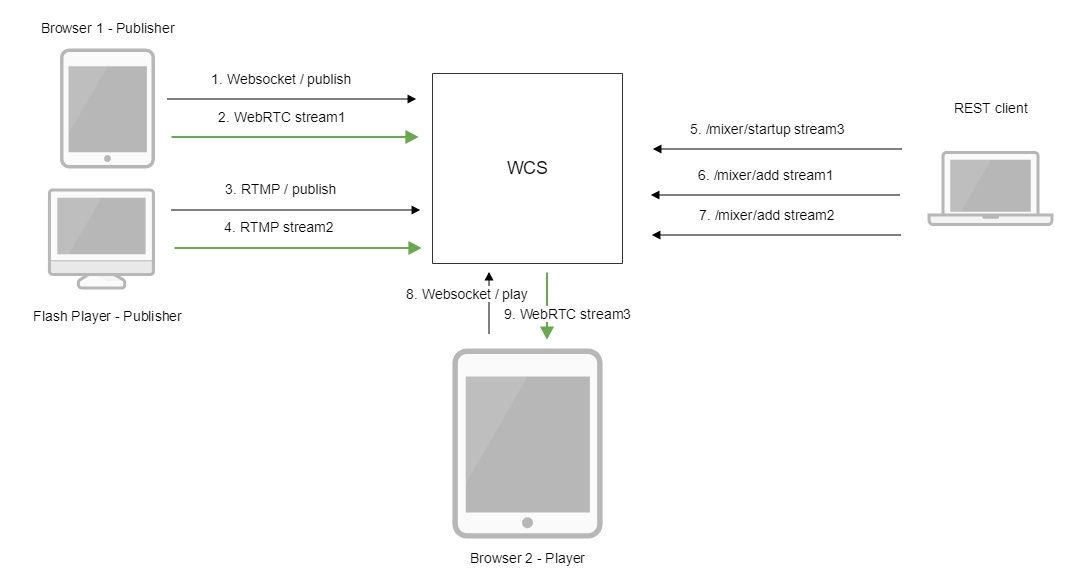 Since build 5.2.872 it is possible to pass most of mixer parameters corresponding to flashphoner.properties mixer settings while creating the mixer using /mixer/startup REST query. In this case, parameters will be applied to the created mixer instance only. For example, the following query

will create the mixer with output stream resolution 640x360, fps 24 and bitrate 500 kbps, no matter what settings are set in flashphoner.properties file

To send the REST query to the WCS server use a REST-client.

Mixing can be configured using the following parameters in the flashphoner.properties settings file

Automatic creation of mixers for streams with the '#' symbol in their name requires the application that handles input streams to register the handler: 'com.flashphoner.server.client.handler.wcs4.FlashRoomRecordingStreamingHandler'. Registering the handler can be done using the command line interface. For instance, for the flashStreamingApp application used to publish incoming RTMP streams this can be done with the following command:

You can read more about managing applications using the command line of the WCS server here.

By default, both video and audio streams are mixed. If audio only mixing is necessary, it should be set on mixer creation

To switch off video mixing for all streams, this parameter should be set in flashphoner.properties file

In this case video mixing can be switched on for certain mixer on its creation.

Since build 5.2.689 audio mixing can be enabled o disabled on mixer creation

or in server settings for all the streams

Publishing a stream without audio or video track to AV mixer

When a stream with audio or video track only is published to AV mixer, it is necessary to disable RTP activity control with the following parameters

In some cases, mixer output stream bufferization is needed. This feature is enabled with the following parameter in flashphoner.properties file

The buffer size is defined in milliseconds with parameter

When OpenH264 codec is used for transcoding, it is possible to change bitrate of mixer output stream with the following parameter in flashphoner.properties file

By default, mixer output stream bitrate is set to 2 Mbps. If a channel bandwidth between server and viewer is not enough, bitrate can be reduced, for example

If picture quality with default bitrate is low, or distortion occurs, it is recommended to rise mixer output stream bitrate to 3-5 Mbps

In this case, sound will be encoded to PCMA (alaw) with sample rate 8 kHz.

To handle mixer incoming streams, if additional bufferizing or audio and video tracks synchronizing is required for example, the custom lossless videoprocessor may be used. This feature is enabled with the following parameter in flashphoner.properties file

By default, maximum mixer buffer size is 200 ms. After filling this buffer, the custom lossless videoprocessor uses its own buffer and waits for mixer buffer freeing. The period of mixer buffer checking is set in milliseconds with this parameter

By default, the mixer buffer checking period is 20 ms.

When custom lossless videoprocessor is used, it is necessary to stop mixer with REST query /mixer/terminate to free all consumed resources. Mixer can be stopped also by stopping all incoming streams, in this case mixer will stop when following timeout in milliseconds expires

By default, mixer will stop after 60 seconds if there are no active incoming streams. 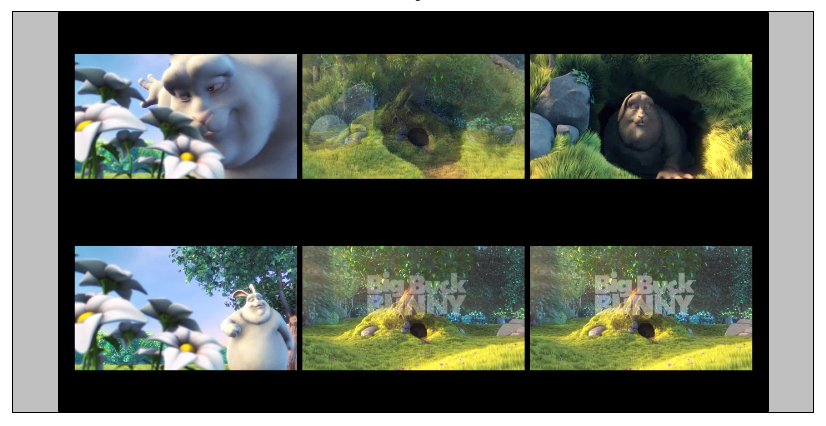 This layout can be enabled with the following parameter in flashphoner.properties file 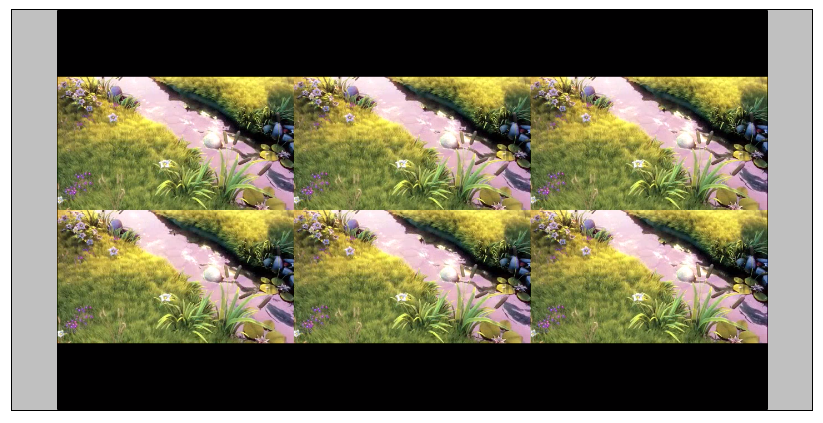 This layout can be enabled with the following parameter

and works for input streams of equal resolution with the same aspect ratio only.

Since build 5.2.842, it is possible to crop participant's video around its center. That can be useful in case of video conference, when participant's face is located in the centeral part.

This layout can be enabled with the following parameter 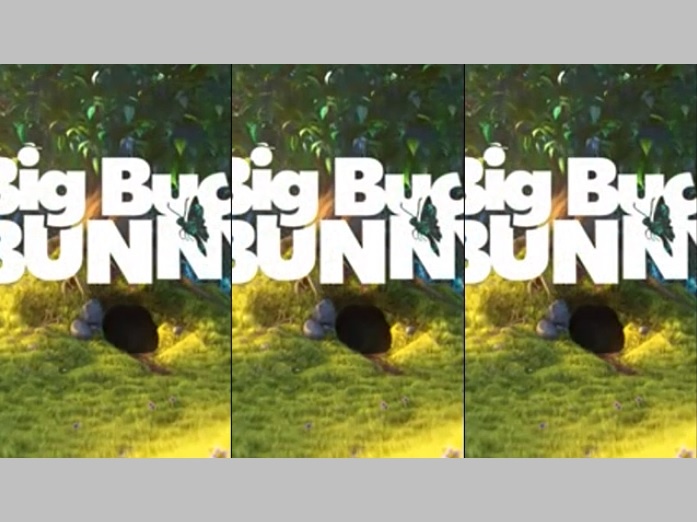 By default, desktop name is used for screen sharing stream.

Since build 5.2.710 it is possible to change screen sharing picture placement with the following parameter:

By default, screen sharing picture is placed above the other pictures 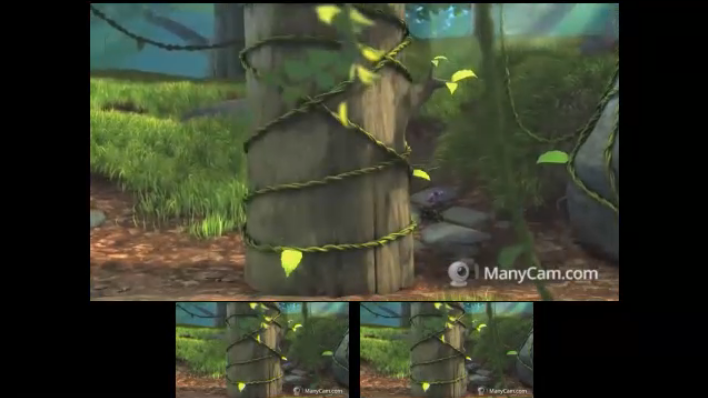 The following placements are supported:

For example, the following parameter 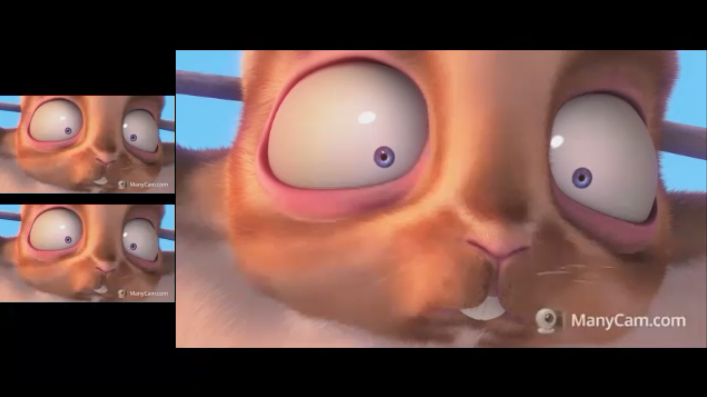 If a number of screen sharing streams are published to the same mixer, the first published stream take the main place. If the stream stops after that, the main place will be taken by the following screen share stream in alphabetical order.

This layout is added since build 5.2.852. In this case a stream that has a name defined in the following parameter

will be background for other streams in mixer. This layout can be enabled with the following parameter

For more fine tuning of mixer layout, custom Java class should be developed to implement IVideoMixerLayout interface, for example

To support caption text location above or below stream picture, a special Box class should be used to calculate pictures placement since build 5.2.878, for example

Then the class should be complied into byte code. To do this, create folder tree accordind to TestLayout class package name

and execute the command

and copy this file to WCS libraries folder

To use custom mixer layout class, set it to the following parameter in flashphoner.properties file

With this custom layout, mixer output stream for three input streams will look like: 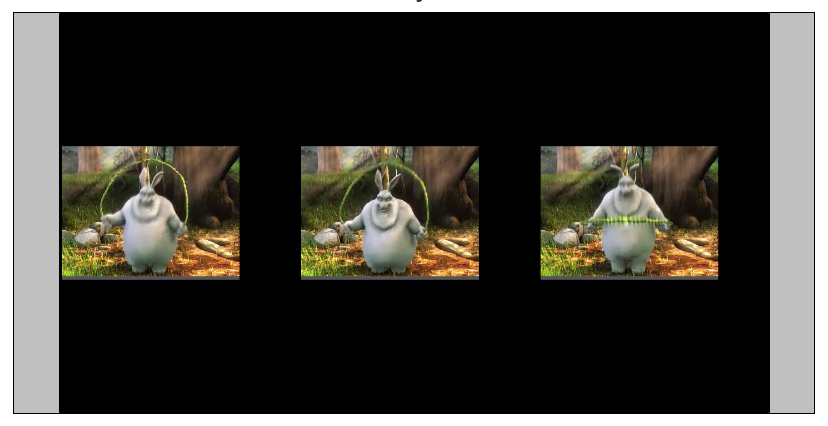 To crop a picture around a central point like CropNoPaddingGridLayout, use Box.fillParentNoScale() instead of Box.fillParent() method. The following example places two pictures by name with cropping around center:

Since build 5.2.693 mixer layout can be defined when creating mixer with REST API, for example

Then, layout can be defib=ned for every mixer separately

Some browsers do not support playback for H264 streams encoded by certain profiles. To solve it, the following parameter is added since build 5.2.414 to set mixer output stream encoding profile

Since build 5.2.693 mixer backgroung can be defined and watermark can be added when creating mixer with REST API, for example

By default, files should be placed to /usr/local/FlashphonerWebCallServer/conf folder. Full path to the files can also be set, for example

By default, mixer converts stereo audio from incoming streams to mono to reduce the amiunt of processed data. This allows to minimize a possible delay while using realtime mixer in video conferencing case.

Mixer can be switched to stereo sound processing if necessary, for example, in case of online music radio. Since build 5.2.922 it is possible to set mixer audio channels count usig the following parameter

In this case for three input streams stream1, stream2, stream3 the following output streams will be generated in mixer mixer1:

Thus, each of the additional streams contains audio of all streams in the mixer, except for one. This allows for example to eliminate echo for conference participants.

In this case for three input streams stream1, stream2, stream3 the following output streams will be generated in mixer mixer1:

Thus, each of the additional streams contains audio and video of all streams in the mixer, except for one. This allows to arrange a full-fledged chat room based on mixer.

In this case, if mixer recording is enabled with the parameter

the main mixer output stream will be only recorded (mixer1 in the example above).

If video MCU support is enables, channel losses can affect mixer output stream quality. Custom lossless videoprocessor can be used to improve quality, that can make an additional latency.

Since build 5.2.835 it is possible to change audio level and mute video for mixer incoming streams. In this case, the original stream remains unchanged. Video track  can be muted (black screen) and then unmuted. For audio track, volume level can be set in percent up to 100, or sound can be muted by setting level to 0.

For example, create a mixer and add 3 streams to it: 2 participants and 1 speaker 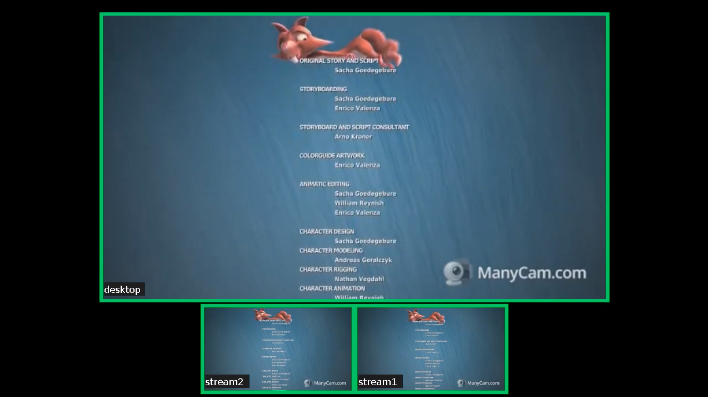 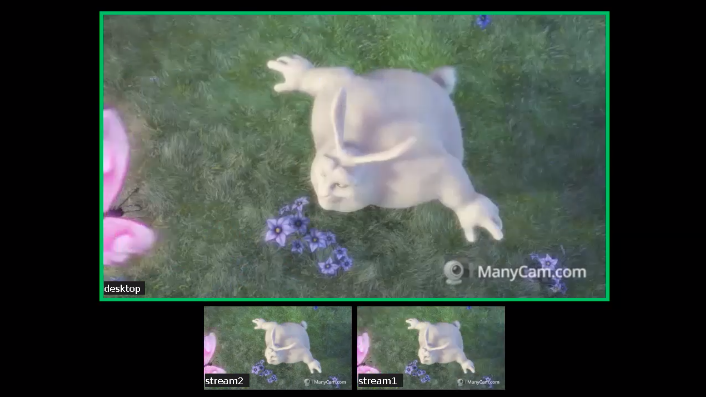 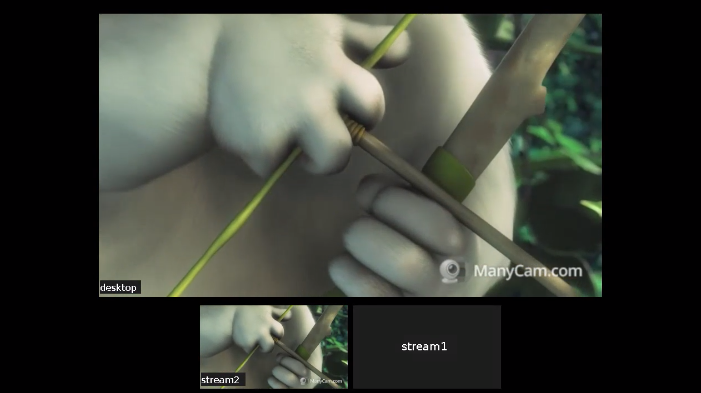 Incoming audio and video management while adding stream to mixer

Since build 5.2.982 it is possible to mute audio or change audio level and mute video while adding stream to mixer. To do this, the additional parameters should be set in /mixer/add REST query like in /mixer/setAudioVideo one 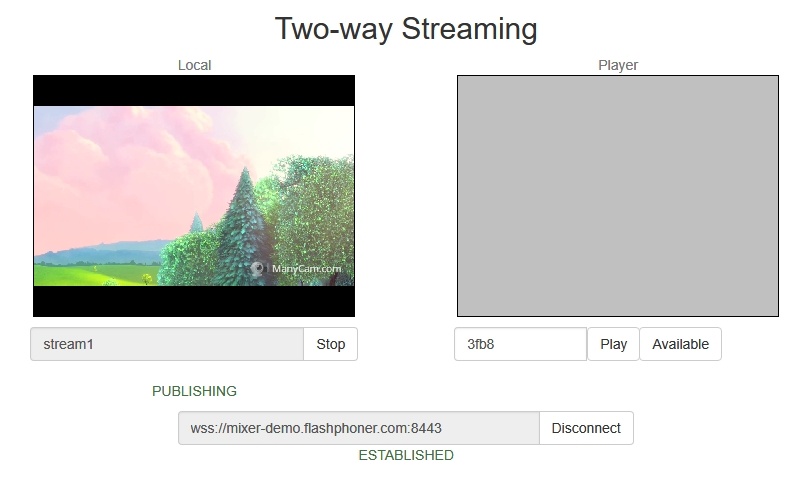 3. In another tab open the page of the Two Way Streaming application. Publish the stream named desktop: 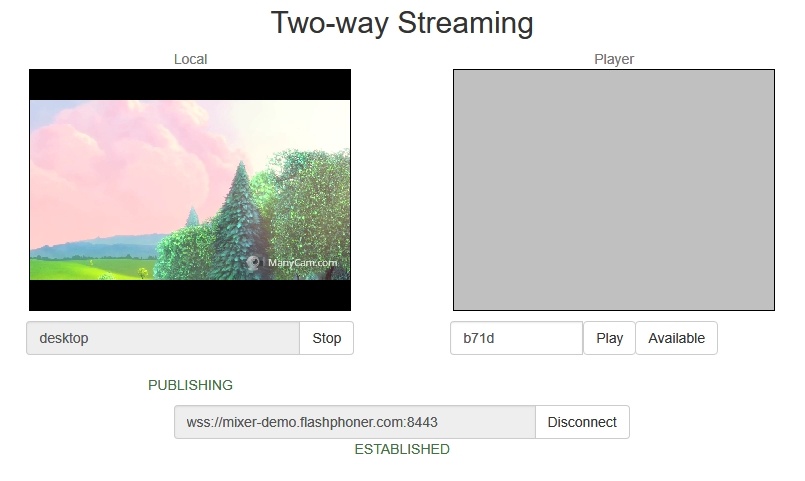 4. Open the REST client. Send the /mixer/startup query and specify the URI of the mixer mixer://mixer1 and the output stream name stream3 in its parameters: 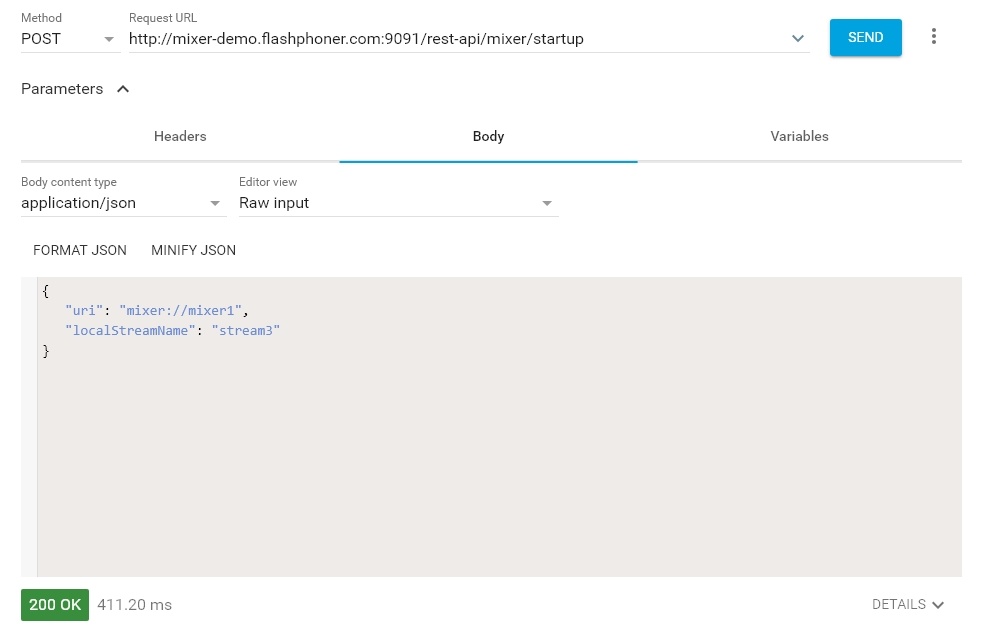 5. Send the /mixer/add query and specify the URI of the mixer mixer://mixer1 and the input stream name stream1 in its parameters: 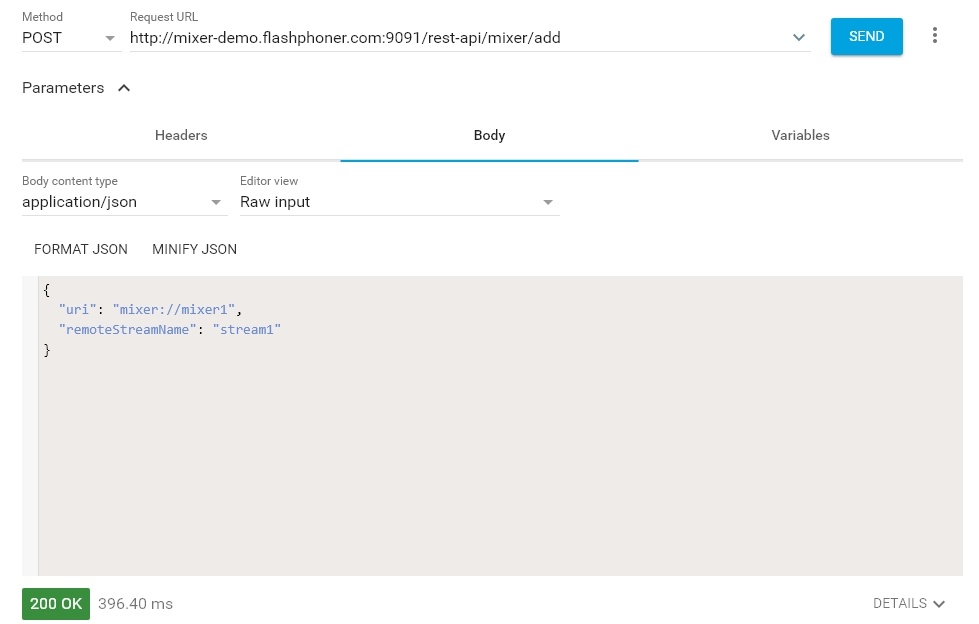 6. Open the Player web application, specify the name of the output stream of the mixer stream3 in the Stream field and click Start: 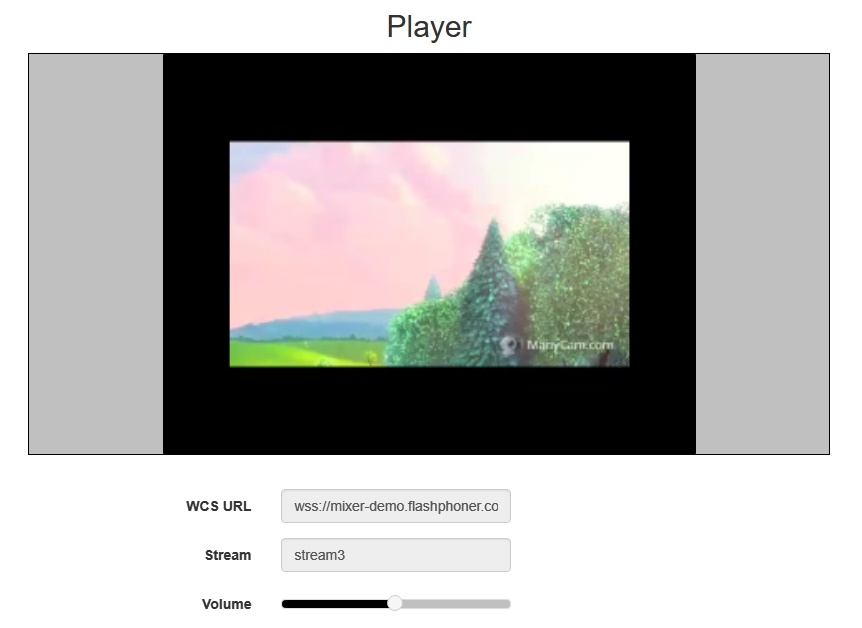 7. Send /mixer/add and specify the URI of the mixer mixer://mixer1 and the input stream name desktop in its parameters: 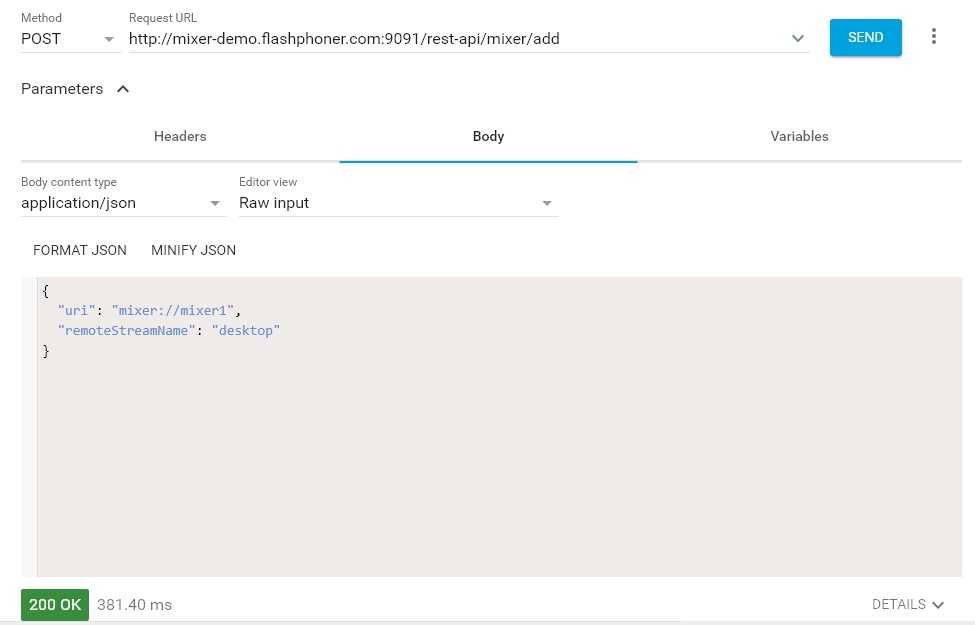 8. In the output stream of the mixer you should see the desktop stream that imitates screen sharing and the stream stream1: 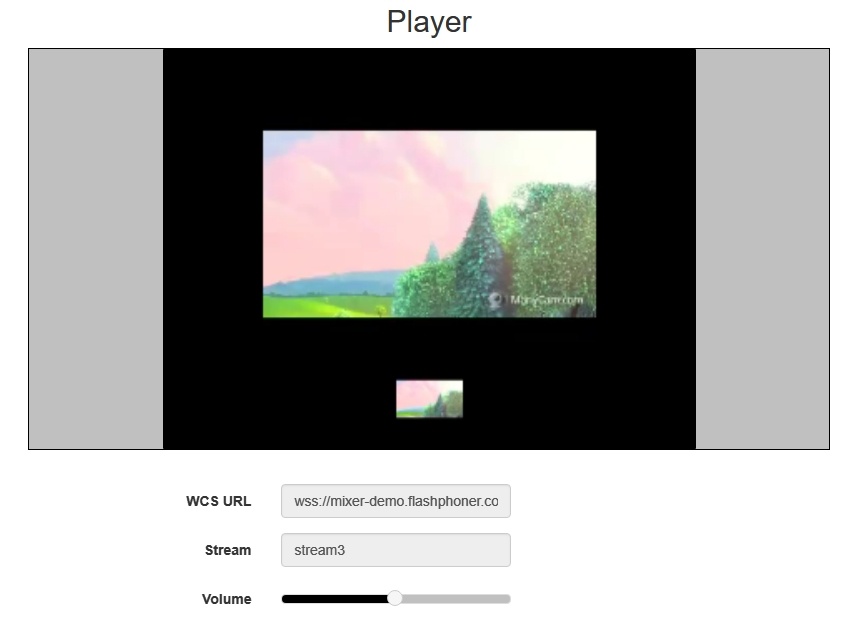 Below is the call flow when using the mixer.

1. Publishing of the WebRTC stream stream1

2. Sending the WebRTC stream to the server

4. Sending the RTMP stream to the server

5. Sending the /mixer/startup query to create the mixer://stream3 mixer with the output stream3

6. Sending the /mixer/add query to add stream1 to the mixer://stream3 mixer

7. Sending the /mixer/add query to add stream2 to the mixer://stream3 mixer

9. Sending the WebRTC audio stream to the client

By default, all the standard REST hooks are invoked for mixer stream. The /connect REST hook is invoked while creating a mixer.

A separate server application can be created for mixer REST hooks handling if necessary. To send REST hooks to this application, the following parameter can be used since build 5.2.634

By default, mixer REST hooks are handled by defaultApp like another streams REST hooks.

1. A mixer is not created is the name of the mixer contains symbols restricted for URI.

Symptoms: a mixer with the name like test_mixer does not create.

Solution: do not use disallowed symbols in the name of a mixer or a stream, especially if automatic mixer creation option is enabled. For instance, the name

2. Mixer output stream will be empty if transcoding is enabled on server on demand only.

Solution: for stream mixer to work transcoding should be enabled on server with the following parameter in flashphoner.properties file

3. The same stream cannot be added to two or more mixers if non-realtime mixer is used

Symptoms: when the stream is added to second mixer, the first mixer output stream stops

Solution: do not use the same stream in more than one mixer