The screenshot displays operation of the Flash video chat. 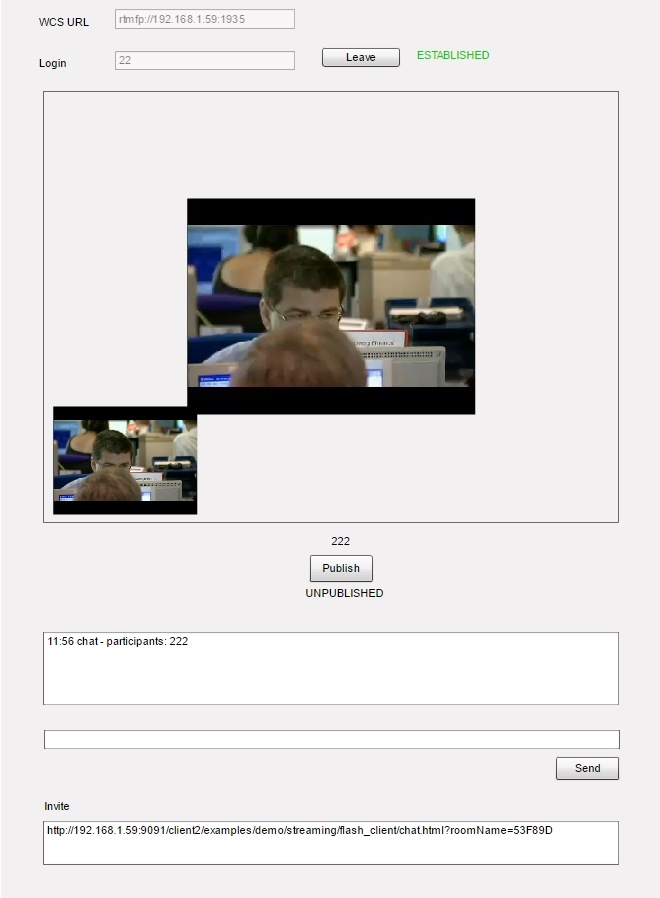 The interface contains input fields to authorize in the video chat:

Below the windows, there is a simple text chat to exchange messages.

The 'Invite' box contains a link to send to the second participant of the chat to invite him or her.

This example is a compiled SWF file embedded to an HTML page using Flex / ActionScript3 and MXML available at:

Working with the source code of the example

To examine the code, let’s take this version of the chat.mxml file with the hash 8b4bafe2766e0a1b485c41a8c64da80c74070ff1, located here. The result of compiling the chat.mxml file is the example application chat.swf. The compiled swf and the source code are available for download in the corresponding build 0.5.3.1894.

The main example file chat.mxml is based on several files implementing ROOM API identical to how the room-module.js for Web SDK is implemented.

1. During initialization the application gets access to the camera and the microphone. line 65

2. Then, we create a Session object and connect to the WCS server. line 144

If connection to the server is successful, the joinRoom() method is invoked to join to the room.

3. While the participant joins the room, the reactions to various events in the room are added. line 150

4. Publishing the video stream from the web camera to the WCS server. line 232

5. Playing the stream of another participant. line 207