The example uses HLS player built in a browser and should be used with browsers supporting HLS, e.g. iOS Safari and Android Chrome.

On the screenshot below a stream is being played in Safari browser. 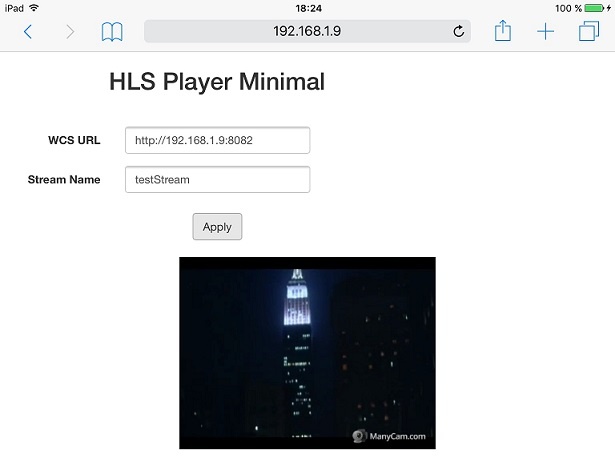 In the URL on the screenshot, 192.168.1.9 is the address of the WCS server.
Port 8082 is used for HLS.
HLS files are saved to directory WCS_HOME/hls/streamName (streamName is the name of the stream being played).
When Apply button is clicked, video source is set to the stream URL and playback can be started.

hls-player.css - file with styles
hls-player.html - page of the player
hls-player.js - script providing functionality for the player

Function getHLSUrl() defined in utility script utils.js is used to set the URL to http://<address of the WCS server>:8082. line 50

When Apply button is clicked,

- method load() is called to update the video element